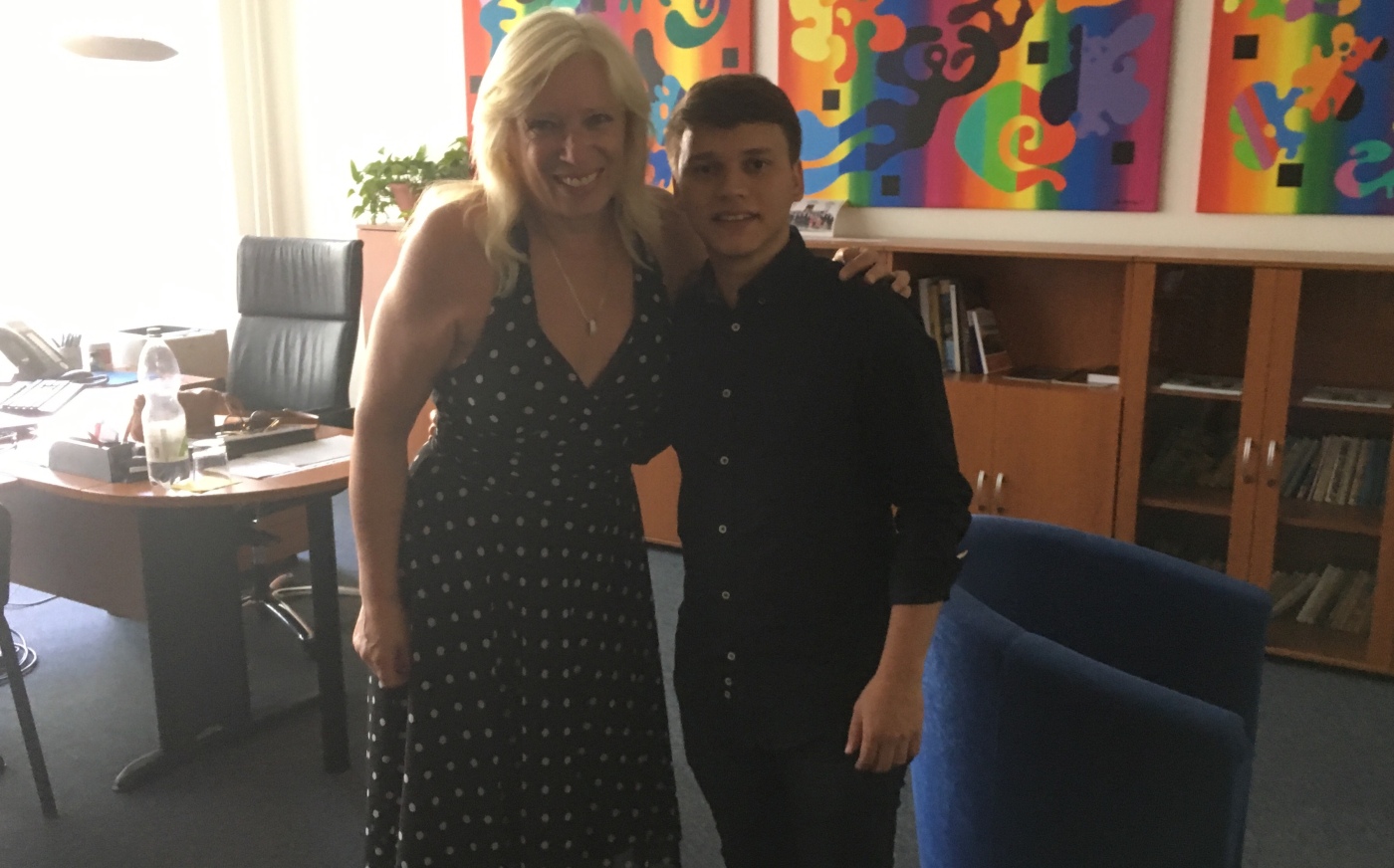 I had the pleasure to speak with Iveta at her office in the Pan European University, Bratislava. Iveta is a sociologist with postdoctoral studies at Oxford University. She was the Minister of Labor from 2005 to 2006 and the Prime Minister of Slovakia from 2010 to 2012. In 2017 she co-authored with Axel Kaiser and others academics and politicians the book “Democracy under threat“. She is also the Mediterranean Corridor coordinator.

We met first at the entrance of the University, where she showed me photos and information about Jan Kuciak, a Journalist who was killed last year. You can find more information here: 1, 2, 3.

Pablo Sánchez: What makes you think that our democracy is under threat?

Iveta Radičová: First of all, there are many indicators as democracy index that shows that the majority of governments in Europe are imperfect democracy, so not full democracy. As (Robert) Dahl has written there are several major characteristics if we can talk about democracy and live in democracy. One is obvious: free elections and fair competitions, but that is not enough, democracy means a very active civil society, plus division of power – a very important pillar- plus democratic culture, and plus but not least, very open and strong institutions who are monitoring the way of legal state. If you have a look at the countries around we cannot speak about full democracies. So, why? Why that happen? There are several theories how to interpret the present situation, one explanation is that in 21st century we are facing totally new transformations, new modern social conflicts. First, a new and very strong modern social conflicts are connected with globalization. The conflict is on one side global open societies and economy and the power of financial market versus national governments and their competitions and plus together with the possibilities of democratic government. There are very logical contradictions. To be global player you need monopoly and privileges, democracy is the opposite: demonipolization and competition, fair competition no privileges.  This is the real conflict we are facing which has an impact on the level of democracy in formal developed democratic countries. There is another element and is connected with what I have mentioned: division of power, strict and strong division in between parliament, government, justice, media, civic society and private sector. If you look around you are facing connections of these powers. There is no real feedback and control of this power. That’s why we are facing the shift toward more authoritarian regimes with real attacks on justice and courts, look at Poland; or civil sectors, look at Hungary. This is going on as a reaction to the conflicts I have mention.

PS: Now you mention these problems of globalization, people looking for a strong leader or populist who will solve them. Do you think the problem is the current elite or it’s the democratic system itself?

IV: The answer is not black and white. As you know, we are facing expectation gap. We had promised something to them. For example, more freedom and real equality of opportunities but that is not the true.  There is real dissatisfaction of citizens and an expectation gap. If there is an expectation gap there is mistrust to the formal political representation, its normal. So, the people are open to something new and here is the crucial moment. There is always a chance on the dissatisfaction and mistrust to be open to emotional reactions and this is the ground for populists. As sociologist I can only say this is an adequate reaction from the people. The problem is not that the elites, the politicians, and financial markets, all together, that they have created the ground for so called new alternative politics. The mayor problem is who is capable to offer something new in these circumstances? The population is divided, if you look at elections, you will find the results very competitive. Brexit, 2 percent. Each population is really divided on those who see the solutions in the classical liberal democracy together with the system of political parties versus those who are very open to easy solutions. There is really the problem and we need a system change. It is always a challenge. System change was also when we were facing the situation after the totalitarian regime and the ground for liberal democracy, so are we capable and able to offer such changes, maybe reforms, that will fulfil emotions of the people without empty populism? Each politician has to be populist otherwise you have no chance, but without lying, with the aim which the people once more can believe.

PS: Now we have more information but sometimes this information is not true, or they take part of the true to make their own story. What could be the solution? I think now the European union is trying to control more these outlets, wouldn’t it give more power to the State to control the information we receive?

IR: Why the State? Liberal democracy is about human rights. We have human rights, all 4 generations of human rights, it means right to live, to have privacy, integrity of my personality, civil rights, education, the right for adequate income etc.. You cannot see only one right. So, the principle is: there is the right of freedom speech but together with the others. Having this in your mind lie has nothing to do with freedom of speech, nothing! It’s a lie! Plus media is a public space, so public interest. Look at the last century’s first step of electronic media like the radio and TV, there were no discussions that law on press and media was inevitable. There was not a discussion that such regulation was not possible because we are talking about mass media, we are taking about manipulation of masses. So why there is discussion on regulation on one much more right spread? Regulate mass media is the normal way how to guarantee all human rights. So, arguments: human rights, privacy and freedom of speech. Lies has not right to be published in public spaces and public space has no interests. If you look around such critical moments as Cambridge Analytics, at least 200 elections campaigns, last year, were manipulated by social media. What are they doing? Who is that people? Who are really influenced? The public! We have the right to know who they are. So that’s why Germany, France, Estonia (especially), they have had already three or four years of regulations without any negative impact; the opposite, it’s been really positive. In Estonia the regulation was so easy, no anonymity in public space. During one year, not such statements, not extremism, not terrorism, nothing.

“These new groups are atomised, they are not communicated, they are closed. So, the mayor precondition for democracy and to be open to another communities is to be in dialogue and exchange, it doesn’t exist”.

PS: One of the things you mentioned in your book was about the individualization of society. But actually, one of the thinks I see in the Central-Eastern Europe is that you have stronger connections with your community and family.

IR: Not really. The way to survive was to create social nets, private social nets, mainly based on family networks but it was not natural, it was a reaction to the way of life under dictatorship without self-help inside communities and families. There was no chance to have normal ordinary goods to every day to live, so it was a way to survive. Immediately when there is freedom, there is also freedom to choose and create social nets and very quickly, it is really influenced by new technologies, so look at the young generation. Their major communities are major social-web communities, and these communities created a new type of connected identity. It has nothing to do with the condition for democracy. I mean communication, interaction, dialogue… Dialogue is the basis of democracy. These new groups are atomised, they are not communicated, they are closed. So, the mayor precondition for democracy and to be open to another communities is to be in dialogue and exchange, it doesn’t exist.

They are only close to their attitudes. Therefore, modern societies are more heterogeneous but not according to their social economic situation but to their attitudes. That’s why sociological representative researchers are very far from the truth. Because the way they are doing methodologically, they do take care majorly on social economy characteristics of society when is true that there are new differences not based on social economic indicators but identities, new collective identities, and we have not representation of those in our researches. That’s why we are surprised in the end of the day when there are new elections. As Sigmund Bauman has written about new double lives, there is one online and another offline. That’s the true, we know a small part of the major part of life for normal people.

PS: No, I want to know what are the positives things about the new era.

IR: What we are living now is an technological revolution, I am not sure that we fully reflect on how strong it is. The societies will be totally different, people really can know everything what they want to know and this is challenge, this was never ever before. Space is smaller, time is quicker, we know what is going on in the same second all around the word. But another thing is if we really know what to do with this information. So I can only repeat what the founder of Global Economic Forum, (Klaus) Schwab, said: “Please humanity, we need moral compass” absolutely! We need a moral compass. What is good and what is wrong? No technology has answer to morality. The same technology can help you to create communism, fascism or democracy. So, the outcome manly depends on ethic and morality. I am not so sure if politics is offering this mayor needs for societies. But if we put together the forces of what we call in sociology “positive deviations”, and we offer a moral compass we can restore the trust in the society, we can do it but only in this way, there is not another way.